I thought this was going to be the simplest principle to explain but after looking at descriptions of it I found the language to be difficult to follow. It took me longer to understand and document than all the other principles put together. The regularly used quote from Martin Fowler states:

To me this quote doesn't immediately conjure a mental image of what DIP is, so let’s instead take a look at what the words mean. Firstly Dependency, let’s assume we have a CustomerController class and this directly creates an instance of a customer repository class to access the database. This is a direct dependency on a concrete class and should be avoided as it leads to tightly coupled classes which are generally considered bad as they are harder to maintain, test etc. 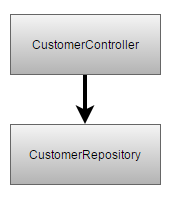 Note that in this diagram the CustomerController is the high-level module and CustomerRepository is the low-level repository. 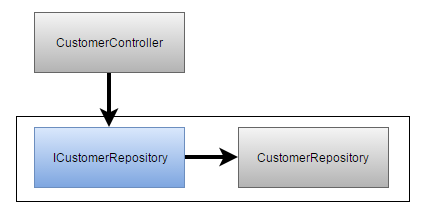 At this point we’ve covered all of the first part of Martin Fowlers quote, so:

…in our example becomes:

The Controller shouldn't depend on the Repository. They should both depend on an abstraction (interface)

So to translate the second part of Martin Fowlers quote:

…in our example becomes:

Now this doesn’t follow some of the other articles I’ve read on the Dependency Inversion Principle, some focus more on Dependency Injection and Inversion of Control, which are related but I don’t see them as the full story. If you disagree let me know!

“No client should be forced to depend on methods it does not use” (more wikipedia) This refers to a situation where an interface has more methods than is good for it. If you've got too many methods then using that interface on something new